Another great graphic from the Economist looking at income distribution across the world’s 30 OECD nations. America has by far the widest income distribution. The average American income is around $33,000 with the top 10% (or decile) of earners having an average $87,257 of disposable income, while those in the bottom decile have $5,819, among the very lowest of any country – which confirms America definitely has a “poor” class. European countries, despite having lower average incomes than the US, have a much more equitable income distribution. Sweden, France and Australia seem to have the optimum distribution in terms of spread and average income.

I took the above analysis one step further to see if the disparity in income was also present in household wealth or net worth. Based on latest available data from the US Census bureau report – “Net Worth and the Assets of Households”, the median household net worth was $58,000, with a significant part of net worth (40%) made up of home equity. This explains why the fall in house prices has been so painful for so many. The graphic below from the report, compares monthly income and household net worth. Household income is the average monthly income received from all sources by all members of a household during the last survey month. There is clearly a strong positive relationship between the median net worth of households and monthly income. Median net worth in 2002 ranged from $5,466 for households in the lowest income quintile to $188,712 for households in the highest. Also, almost 80% of households had a median net worth of less than $100,000. 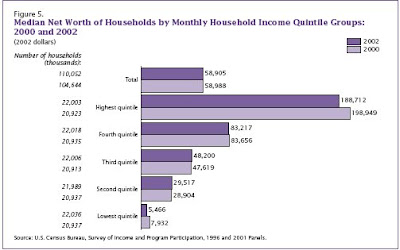 The above data and graphics show why it is not surprising that Obama’s political and economic ideology to “spread the wealth” is gaining popularity. Clearly America has a significant societal divide amongst the rich (have’s) and the poor (have-not’s) driven by the disparity in income levels.

While I think there is need to address the income and wealth inequality, I question if letting the Government do this directly is the most efficient way of achieving a more balanced outcome. Sure, raising taxes on the “rich” will increase tax revenue, but will this be effectively redistributed to the “poor” for whom the counter balancing tax cuts are being designed. To me focusing on other structural issues like regulatory reform, innovation, universal health care and reducing the cost of tertiary education are the best ways to keep the economy growing and ensure that everyone is getting richer, not just who the government chooses.

Reforming wealth distribution across America is one, if not the, center piece of future economic policy. Your perspective clearly depends on which side of the inequality you are on.

Eligible For PUA But Do I Get Back Pay and the $600 FPUC From The Date The Program Was Initiated Or From The Week That I Filed?

Even if You Qualify for Extended Unemployment via PUA or PEUC after July 2020 the Extra $600 FPUC Unemployment Stimulus will Not be Paid, Only the Regular State UIC Amount