Skip to content
There is no doubt that the nation is going through one its toughest employment periods in a long time. With unemployment rates close to 20% across many regions, it’s tough for current job seekers and new graduates trying to get into the workforce. This is why it is even more important to arm yourself with the skills now or study in a relevant program to ensure that you are more employable in future growth industries and professions. To do this, look at a recent release by the Bureau of Labor Statistics, showing the projected employment growth in the 2008–18 period. As you can see from the graphics, employment growth is concentrated in the service-providing sector, continuing a long-term shift from the goods-producing sector of the economy. 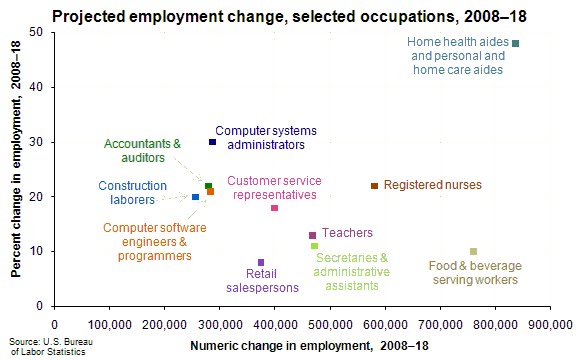 More than half of the new jobs will be in health and services related occupations. In addition, occupations where a college degree or award is usually required are expected to account for one-third of total job openings during the projection period. Employment of registered nurses is expected to grow by almost 582,000 jobs, while the number of home and personal health aides is projected to grow by 836,700 (48%) over the over the 2008–18 period.
The good news in terms of job opportunities is that openings from replacement needs—those which occur when workers who retire or otherwise leave their occupations need to be replaced—are projected to be more than double the number of openings due to economic growth. The projected growth for the 2008-18 period is larger than the increase of 10.4 million over the 1998-2008 period, or 7.4 percent. Industries projected to have the most employment growth are in professional and business services: management, scientific, and technical consulting; computer systems design; and employment services. Altogether, these 3 industries are expected to add 2.1 million jobs. Four of the top 10 gainers are in health care and social assistance industries. Employment in offices of physicians, home health care, services for the elderly and persons with disabilities, and nursing care facilities is expected to grow by 2.0 million.
Of the flip side, of the ten industries with the largest projected employment declines, 4 are in the manufacturing sector and 2 each are within retail trade and information. The largest decline among the detailed industries is expected to be in department stores, with a loss of 159,000 jobs, followed by manufacturers of semiconductors (-146,000) and motor vehicle parts (-101,000).
The diversity of the labor force is also expected to markedly increase by 2018 as a result of higher population growth among minorities. Higher birth rates and increased immigration, along with higher labor force participation rates by Hispanics and Asians—the share of the labor force held by minorities is projected to increase significantly. Whites will remain the largest race group in the labor force in 2018 (79.4 percent) despite growing by just 5.5 percent between 2008 and 2018. The number of Asians in the labor force is projected to increase by 29.8 percent and the number of blacks by 14.1 percent. In 2018, Asians are projected to comprise 5.6 percent of the labor force and blacks to make up 12.1 percent.
While the above is based on historical statistics and a number of assumptions, it is not surprising to see the industries that are expected to grow (and decline). The lesson from this though is that you should focus, whether you are already working, graduating or thinking of what to do, on where the jobs will be. A degree looks like a must and if you focus on information technology and health care industries your job prospects should be much than those who don’t.
Browse and apply for jobs in the above industries now at monster.com

~ 5 Clear Signs your Job is in Danger (and 5 things to do)
~ Preparing for a Layoff
~ American Employees: Cheap to Fire
~ How to Succeed in Business
~ Employer Tax Credit Stimulus to Create New jobs and Lower Unemployment

View All
Government Rebates and Payments

[Update] While New Jersey has started paying the $600 FPUC weekly payment to more claimants, it is well behind in processing new claims and making…

The IRS recently reported that most of the 2020 economic stimulus check payments have now been officially distributed. And in many cases the funds have…

House democrats, led by Speaker Nancy Pelosi, have passed (208 to 199 on May 15) another stimulus bill in Congress, called the HEROES act, which…

[Update] While Pennsylvania has started paying the $600 FPUC weekly payment to more claimants, it is well behind in processing new claims and making retroactive payments.…