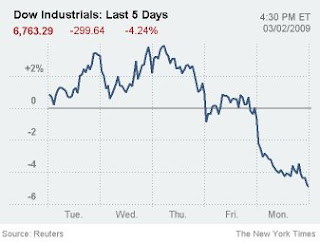 I wrote about 6 months ago that Dow 5000 was an outside possibility following the first wave of the credit crisis induced market panic. The Dow had fallen below 10,000 at that time and even I thought that 5000 was highly unlikely. But, it looks like the seemingly impossible is now going to come to pass as the market goes into free fall. Like many Mondays past today was another reminder that no one – and I mean no one – knows when the market will reach rock bottom. Here’s what some analysts from around the major media sources are saying about the current market falls and outlook. There is a clear sense of panic and despondence.

“Investors finally understand this recession will be deeper and longer, and the recovery will be shallow,” said Joe Battipaglia, chief market strategist for the private client group at Stifel Nicolas. “And the government doesn’t have a sense of any solution that might instill confidence.”“This market will only stop when people run out of stock to sell…I don’t see why they won’t move on from the financials to [selling] everything else, since some financial names are already nearly worthless.”

From Bloomberg – Treasuries rose as investors sought a haven, driving the yield on 10-year notes down 10 basis points, the most in almost two weeks, to 2.92 percent. Options investors are paying twice this decade’s average to protect against losses in U.S. stocks through 2011, signaling the bear market that already wiped out $10.4 trillion of equity value may last two more years.
“There’s a real panic in the markets, with some people wanting to buy long-term insurance at any price,” said Peter Sorrentino, who helps manage $16 billion, including $130 million in options at Huntington Asset Advisors Inc. in Cincinnati. “People have lost hope.”

The NY Times reports that all eyes are on that Friday unemployment report. Economists expect a loss of 675,000 jobs in February, following a decline of 598,000 in January. The unemployment rate is expected to rise to 8 percent, from 7.6 percent.

It’s pretty despondent everywhere,” said Dwyfor Evans, a strategist at State Street Global Markets in Hong Kong. “O.K., there are signs that some of the leading indicators have stabilized to some extent, but it’s at a very, very low level, and we’re not seeing corporate investment picking up, or consumers starting to spend again — in other words, the traditional mechanisms by which economies come out of a recession are absent at this time.””As bad as things are, they can still get worse, and get a lot worse,” Bill Strazzullo, chief market strategist for Bell Curve Trading, told The Associated Press. Mr. Strazzullo said he believed there was a significant chance the S.&P. 500 and the Dow will fall back to their 1995 levels of 500 and 5,000, respectively.

From Reuters – Stocks fall below 1997 levels as the government bailed out American International Group (AIG) again and reported a record $61.7 billion loss that raised fears efforts to stem the financial crisis still are not enough. All 10 S&P sectors were in the red.

“When does this end? What are the sign posts that we’re all going to be looking at to indicate to the government that this is working or that we are seeing a turn around?”Underscoring the negative tone were comments from billionaire investor Warren Buffett, who said “the economy will be in shambles throughout 2009”, further dampening investor confidence.

My advice on what to do next is to be very cautious and if you are thinking of investing for a quick profit. Do not. This market is far too volatile and only active (professional) traders stand to make any money. If you have got money invested in your 401K, think of changing your allocation to bonds and cash for the near term. I even think that lowering your 401K contributions, so that you invest only enough to get the company match, may not be a bad idea if you expect the markets to fall even further.

If you are like me and have lost (on paper) a lot of money from existing holdings, there is little point panic selling now and unless the company you invested in is highly likely to go bankrupt or you desperately need the cash, then just sit tight and perhaps in a few years you may break even.